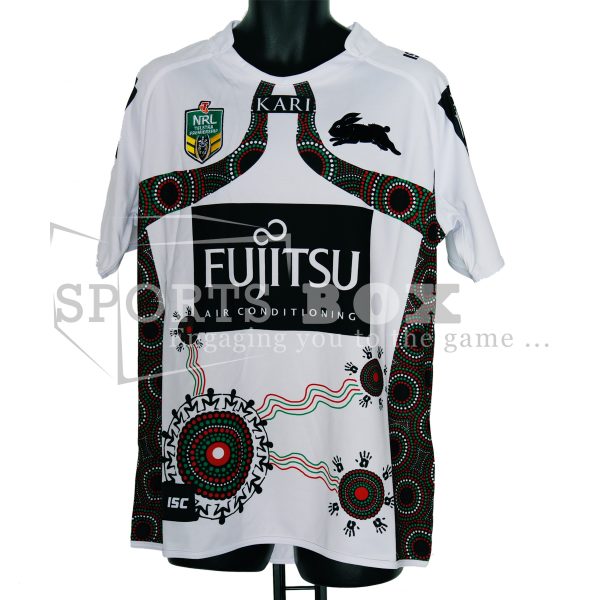 0 out of 5
No reviews. Be the first and leave a feedback.

Available in Men’s and Kids sizes, the 2015 Indigenous Jersey designed by Nikita Ridgeway – Designer, Founder and CEO at Dreamtime Ink Australia – the jersey uses symbols to reflect various elements of indigenous communities and culture, including their connection to the South Sydney Rabbitohs Aboriginal players, past, present and future.
Jersey Elements:

Spirits: represent past, present and future Aboriginal Rabbitohs players. These are placed around the gathering symbols.
Community Gathering Symbols: large symbol with Spirits, represents the Club itself. Smaller gathering symbols with hands surrounding them represent the communities the Club has inspired and that have been influenced by the South Sydney Rabbitohs.
Hand Prints: represent the many helping hands in the community
Travelling Tracks (Green and Red Lines): represents the journeys and paths of those players who worked hard to be able to play for the Rabbitohs and their journeys back to their communities to give back
Dreaming Tracks (above chest and around heart): these two designs represent the flow of the journey and Dreaming Story of the South Sydney Rabbitohs’ connection and guiding role with Aboriginal Players from past, present and future.

There are no reviews yet.